What Does It Mean to Have Dense Breasts?

3D mammography is often recommended for women who are known to have dense breasts, and additional imaging tests may also be recommended.

Why Does Breast Density Matter?

While fatty breast tissue on a mammogram is dark and transparent, dense breast tissue appears as a solid white, which often makes it difficult to see through, potentially masking breast cancer, or making it harder to detect.

Additionally, normal, dense breast tissue is a risk factor for developing breast cancer because cancers form in the glands and fibrous tissue that make a breast dense.

A universal reporting system for levels of density, called the Breast Imaging Reporting and Data System (BI-RADS), uses the letters A, B, C and D to indicate your level of breast density. This is often recorded in mammogram reports by the radiologist reviewing your images.

These levels of density indicate:

A: The breasts are almost entirely composed of fat. About 1 in 10 women has this result.

B: There are scattered areas of fibroglandular density, but the majority of the breast tissue is non-dense. About 4 in 10 women have this result.

C: There are some areas of non-dense tissue, but the majority is dense. About 4 in 10 women have this result.

D: Nearly all breast tissue is dense. About 1 in 10 women has this result.

Women whose level of breast density is C or D are usually considered to have dense breasts.

You may be more likely to have dense breasts if you: 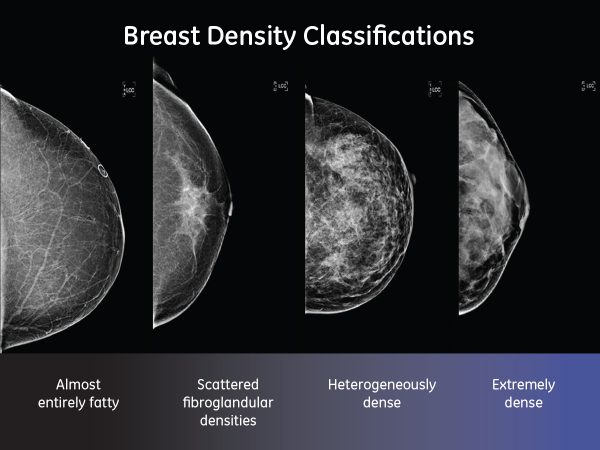